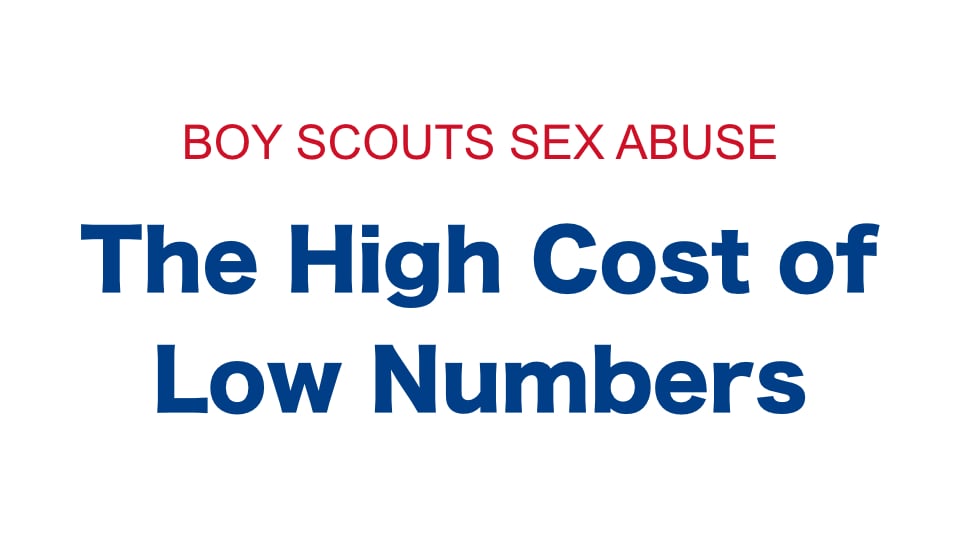 The NBC News article: Boy Scouts reach $850 million settlement with tens of thousands of sexual abuse victims. The settlement is the largest in a child sexual abuse case in United States history.

High cost to the victim and their family (siblings, parents, grandparents) at the time(s) of the sexual abuse. And long-term high cost to their mental health (including PTSD), relationships, careers, authority figures, marriage, family-life.

This is the spiderweb of societal risk that a perpetrator presents.

There’s no way the Boy Scouts gets away with this for this long without some sort of systemic chain-of-command problem. From parents not believing children, to parents afraid to snitch on other parents, to parents turning a blind eye, to leaders not taking reports seriously, to the top brass in the Boy Scouts not wanting to have a tarnished reputation.

Loss of integrity and reputation

Like termites eating away at the integrity of a structure, a low number of sexual abuse cases should absolutely destroy an organization. Thirteen-hundred new cases every year – for 60 years – should bring down an organization that ignores such an egregious security flaw. The first 1,300 sexual abuse cases during the first year should have brought down the Boy Scouts. The fact that the sexual abuse spanned 60 years makes it all the worse. That means so many more people inside Boy Scouts knew about the termites – and did nothing.

What’s the cost to the community and society, to creativity and productivity, to GDP, due to victims’ PTSD, rehab, repair, and therapy?

And almost a BILLION dollars in restitution! Which is just a financial way of saying “shame on you.”

War Veteran, Amber Forest, served in the Army in Iraq. She returned a very different, difficult and depressed person. She lost her job and then her house – and ended up homeless for 10 months during the winter in Colorado. Then somebody mentioned that she might have Post Traumatic Stress Disorder (PTSD) and recommended that…

Carrie: The other thing I need to work on is “letting things go” in general. Holding on tends to eat me alive because I’m way too sensitive about literally every single thing. Me: Give those things a smile, a deep breath, and a blessing. Then let them go. You don’t need to keep checking in…

Carrie: “I want to kill all the other drivers on the road while I’m driving to work. I hate the situation I’m stuck in at work!” Had a good chat with my friend Carrie, who hates her job situation but is afraid of standing up for herself by telling her boss what would be better…

My Mom never rebounded from her divorce from my Dad, from me and my brother eventually going to live with Dad, from the sale of the family cabin, from the death of her Mom, from the sale of her childhood home. She’s been unhappy since 1971 (the divorce), and it got a little worse with…