In a Toastmasters speech contest, you can disqualify yourself by going under-or-over-time! Toastmasters’ International (inspirational/motivational) speech contest allows you to speak for 5-7 minutes – with 30 seconds of leeway. IE: you’re technically good from 4-minutes-and-30-seconds to 7-minutes-and-30-seconds. But if you end your speech at 4:29 or 7:31, you’re disqualified. I’ve seen it happen to my competitors. And it’s devastating!

During last year’s 2016 District 39 Spring Conference in Stockton, CA, Donny Crandell won first place in the International Speech contest (I came in 2nd). He went on to compete and win at the Semifinals round, and was 1 of 10 people, worldwide, that competed on the big 100-foot-wide stage in the Finals round – the World Champion of Public Speaking contest.

This year, Donny and I chatted during the District 39 Spring Conference in Anderson, CA, where we were competitors again. He shared his story of going overtime by 6 seconds when he was competing on the big stage last year. “I blew it,” he said. “I went overtime by 6 seconds.” “Did you ad-lib anything,” I asked. “Yep.” he said. “I went off script and added the Serenity Prayer at the very end of my speech.”

The international speech contest season is from February to August. Seven months. It’s a lot of work, sacrifice, time away from family, extra time before and/or after work. And it’s not a paid gig. You volunteer. So going overtime by 6 seconds can be devastating – especially at the Final round in front of an International audience of 2,500 people. All that hard work, luck, time, and travel…

Going off script CAN work, but it’s such a coin-toss. You have no idea if you’re gonna land on heads or tails.

Listening to the right music before speaking on stage is like putting on a parachute before jumping out of a plane! Before entering a Toastmasters speech contest, I test a lotta dance music mixes to see if they put me in a really good mental/emotional “zone.” These are the ones I keep coming back to. In fact,… 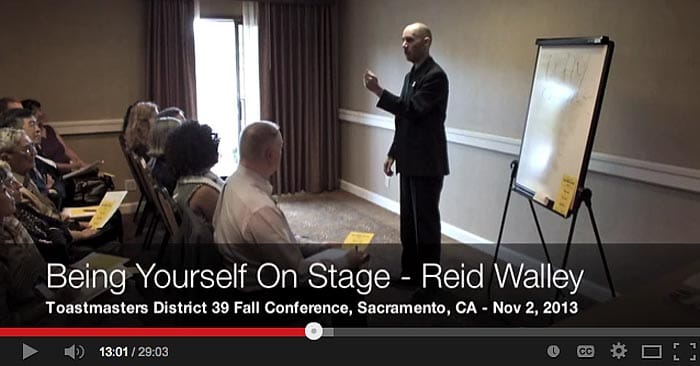 “It was actually a pleasure to have you last night [Friday, April 23, 2010] as our model speaker. You definitely raised the bar for future model speakers at the Division level; you are a professional speaker. I personally appreciated that you took your personal time on a Friday night to share with us an outstanding…

Whew, competing at the 2013 Toastmasters International Semifinal Speech Contest is a LOT different from competing at Club, Area, Division and District contests. First, you’re competing in front of an audience of complete strangers (unless you’re in your home-town of Cincinnati, OH, like Chris Nachtrab was when he won 1st-place in my Semifinals group). I…

April 3, 2017, I presented my 2017 Toastmasters International Speech Contest speech for the first time out loud in front of my Capital City Toastmasters club. Plenty of rough-and-tumble mistakes, including a totally botched opening. It was awesome! You can view the full “Mistakes & All” video here. The third point in my speech was discovering the…